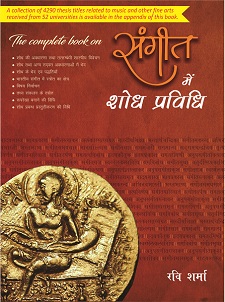 The begining of music is mere surmise. It may have come into the ancient communities by any means. Some may have heard it in pattering of rain, others in howling of the wind. All cultures have their unique music. But among conscious thought of music, one of the oldest principles to be put on record, was by Bharat. Practice of Indian music has rested for two thousand years on the principle of Nav-Trayodash Antaraal or law of perfect consonence, propounded by Bharat in his Natyashastra. Very similar, Cycle-of-the-Fifth was documented by Pythagoras in sixth century BC. Theories of music practice have been written by philosophers, practitioners and teachers in major musical streams across the world. Development of music must been dealt by thinkers in different ages. Unfortunately a huge number of such treatises have remained in oblivion. Western scholars with increasing interest in India, looked for and found several hitherto undiscovered writings. Naturally, these accidentally revealed books did not follow chronology. It took decades of work by various Indian scholars steeped in traditions of Indian Classical music as well as ancient and modern Indian languages, social and cultural history, to place such treatises in proper order and trace successive development of Indian music. Modern music scholars of twentieth century, like Prof. Lalit Kishor Singh, Pt. Omkarnath Thakur, Dr. Lalmani Misra, Acharya Brahaspati, Thakur Jaidev Singh etc. succeeded in eliminating errors in analysis of ancient principles by medieval scholars and establishing rationality and logic of music dictum and canons brought into practice by stalwarts Pt. Bhatkhande and Pandit Paluskar. The structure of institutional music system, these noble visionaries laid, blossomed and bolstered the modern university system. Both of them understood rigor well and had created notation systems, started printing press dedicated to music and created army of students, which feeds formal and informal study of Indian music to date. In comparison, not one university ever started or supported a press for printing of music treatises. Were it not for individual contribution and dedication that started Sangeet Karyalaya at Hathras, contemporary musical compositions, discussions and even experimental innovations may not have existed. At the very minimum, the interest that Hathras press created among general public, oriented only towards light music, might have fizzled away, yielding to fusion-world-music as early as seventies or eighties.

Sangit Mein Shodh Pravidhi is a unique book in Research Methodology on Indian Music for researchers and music lovers. This book contains 4290 research titles already completed in 52 universities. This is the first ever documentation of contemporary research in music. This is a fundamental work, no way near perfection as a casual reader may demand. For example, research work accomplished in a given university is listed but there is no mention, when this work was done. Young students may well demand details regarding publication and even contact details of the scholar. One should keep in mind that it is not a directory compilation but has been included with the aim of attaining better understanding of research carried out in Indian universities in the field of Indian Classical music in past few decades. Almost half a dozen thesis may be taken up on the nature, subject, relevance, treatment etc. At least, after publication of this book, scholars, teachers, academic staff and librarians of these universities may take up the responsibility of apprising Prof. Sharma of updates and new topics being considered at their institution.

But, the book is far more than this unique listing with potential for improvement of music reasearch. This book is valuable as the primary handbook of scientific research in music. Most of music studies carried out in institutions remain affected by the oral tradition. The artistes who eke out a living by initiating the young in Indian music, fill up the young minds with fancy tales about power of musical notes and grandeur of a particular tradition or school. The initial stress upon actual practice and performance is accompanied with disdain for "bookish" learning. The academic structure right up to university puts equal and sometimes greater weightage on performance. Hence, several students, even after their masters come to undertake research with no idea about rational methodology of studying a subject. While students of science are made familiar with the notion of subjectivity and objectivity, students of Arts never imbibe the difference. Prof. Sharma, who has acted as academic consultant, advisor and expert in numerous boards and committees of various universities and academic bodies, has taken up this last opportunity offered to aspiring scholars to educate them as they complete their cumpulsory Course-work before being permitted to take up research. This book, written in Hindi, is a perfect training manual. Anyone who goes through this book at his own pace, will begin to understand concepts that coach him to sift, evaluate and analyze. For the first time, he would begin to understand the value of numerous concepts he had memorized through rote.

The book, through its well planned and efficient eight chapters, explains concept of research, defines its aspects and ditinguishes them from commonly held erroneous notions. The pointers for planning, conducting and presenting one's research, are all well illustrated, throughout the book. For example, distinguishing invention or innovation from research, Prof. Sharma refers to Ustad Amir Khan's innovation of rendering Khayal in AtiVilambit by spacing notes with four measures of rest. He says while this novel application will be termed invention of Amir Khan, its study and application by other vocalists would be treated as research on their part. He illustrates role of point-of-view in critical analysis with example of the fact that Pt. Mallikarjun Mansur was given to singing Aprachalit Raga-s in his recitals. While some critics may hold Pt. Mansur in esteem because he mastered such difficult Raga-s; some others may construe he did so to garner respect for his knowledge; a few others might observe, that he sang uncommon Raga-s unfamiliar to listening public, and thus could not be popular. Through such real examples from domain of classical music, Prof. Sharma shows how to study things in perspective and present them with underlying continuity of thought. First three chapters suffice to instill readiness to search for, select and start research on a particular topic. Fourth chapter defines the valid areas for research, the fifth trains them in fulfilling requirements step by step in forming and fine-tuning methodology for their proposed work. Sixth chapter instructs in how to deal with various resource material. Next is a small focused chapter of ten pages that delienates creation of an acceptable synopsis. Over thirty pages of the final chapter explain in detail, the manner of presenting the dissertation. This reduces waste of energy along with optimization of efforts. Scholars who understand the various aspects and phases of carrying out research and its presentation are likely to produce relevant study within optimum time-span.

The book is a well-produced volume published with grant from Central Hindi Directorate, Ministry of Human Resource by Touryatrikam Publications, Delhi.

Browse collection or Order on Omenadshop.