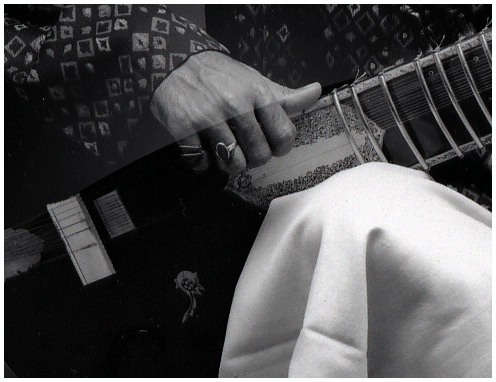 Instruments have been in existence since dawn of civilization. It took thousands of years from the Sam Ved period for the Veena to attain its modern form. Natyashastra of Bharat is an evidence that ample research was devoted to musical instruments – wind, percussion and strings. It seems that human race was more concerned with instruments than with singing, where thought and development was concerned. However, it was merely a few centuries back that instruments began to exhibit possibilities independent of vocal music. In past three hundred years, Indian music has gained new grounds. Not only the process of their structural development has maintained steady pace, but continuous experimentation with playing technique has contributed to formation of distinct identities. String instruments led this change.

Possibly, the Gharana-s (which started with Tansen’s descendents) helped in this, as some of them gained greater distinction in playing some or the other instrument in comparison to vocal renderings. The legendary musician had reserved Rudra Veena for his blood line while promoting “lesser” instruments like Sitar, Sarod for disciples. Initially, more time was granted to accompanying instrument during a vocal performance; later, full-time performance of instrument too began to appear. Strings – primarily, Surbahar, Sitar, Sarod, – gained independence with dedicated styles – Maseetkhani and Razakhani.

Indian instruments became a contending force in twentieth century. Yet, in a way, they were still tied to the vocal tradition – Senia school to Dhrupad and Vilayat Khan one to Khayal. Misrabani accorded true sovereignty to Indian string instruments where compositions are situated in essence of instruments – the ability to break sound at desired point. Misrabani explores complexity of meter and fashions a new dimension, though true to tradition. With focus on strokes, Misrabani  compositions are at their best in such patterns as 14 beat Jhoomra, Jhap Tal, Ada Char Tal, Sool Tal etc. Yet, even through such patterns as Teen Tal, Kaharwa, Roopak these compositions create charisma. It is now an accepted hypothesis that inventions arise more because the age needs them than out of inventor’s indrawn genius. Almost all path-breaking inventions have been the result of individuals working independent and unknown to each other. The rising popularity of instruments created a space for disciplines of both hands. Having initially failed to learn Sarod, Rabab and Sursingar, as promised, with Tansen descendent Vazir Khan, Alauddin Khan was later steeped in Senia Dhrupad tradition by the maestro. In later life Alauddin Khan employed his versatility towards orchestration as well. Among the numerous things he experimented with, was regulation of stroke patterns on Sarod and imparted this new technique to his disciples.

Trained in Dhrupad singing under Swami Pramodanand, Dr. Lalmani Misra was well versed in Pakhawaj, Tabla as well as string instruments. At fourteen he was employed as assistant music director in a Calcutta recording studio. As music director to dance troupe of Pt. Uday Shankar he toured throughout the world, conducting orchestra for ever new dance and ballet productions. His musical compositions began to employ cyclic strokes in strings. As one after other legendary percussionists accompanied him in concerts, the measured stroke patterns, which led to charismatic compositions, began to attract attention of musicians and aesthetes. Tabla maestros began to call them ‘Koot ki Tan’ because of their complexity (koot – devious). While he himself referred to these as ‘Mishrakhani’ his fans and followers began to use the term ‘Misrabani’ to emphasize the completeness of a language of this practice against the narrow, limited, contextual applications designated by the suffix ‘khani’.  Misrabani is indeed rooted in objectivity to create beauty, and thus defies simplistic definitions. It is the art of balancing rhythm pattern, starting beat and mizrab strokes.The following briefly outlines an estimation of Misrabani compositions as given by Dr. Pushpa Basu in her book, Rag-Rupanjali.

The scholar refers to Dr.  Misra’s book, Bharatiya Sangeet Vadya in which he states that the most common rhythm was teen Tal in sitar compositions because of the exponential nature of the pattern (16 beat = 4 x 4) which granted ease of calculation and thus displayed a variety of Chhand-s in slow compositions. She conjectures that this motivated him to create compositions in odd or complex Tal-s like 7-beat Rupak, 14-beat Jhoomra etc. She observes, “To overcome the dearth of attractive compositions in metres other than teen tal, after deep and careful meditation, Misra ji created such Chhand-s in various Tal-s which were easy to play and rich in appeal. Based on definite Chhand patterns of Bol-s, the execution of these compositions is scientific, schematic.”

Teaching is natural overflow of knowledge; to teach one’s own innovation accords great joy. Dr. Misra had founded a music college in Kanpur in early fifties; he joined the budding instrumental department of Banaras Hindu University soon after. Interaction with a large number of young learners helped him in understanding genuine oddities and their personal mental blocks. Creating new compositions for listening public was exciting where he could delve in realm of complex combinations, but creating them as a tool to understand, master and enjoy music was a responsibility to Dr. Misra. Over a thousand Misrabani Bandishes in more than hundred and fifty Raga-s exist in print, while an equal number are available in hand-written drafts for four books. Son, Gopal Shankar, teaching in the same university was determined to publish them all. When young Gopal Shankar Misra died a day before his performance in a 5 day function dedicated to father Dr Lalmani Misra on his 75th birth anniversary, Indian musicians and scholars were shattered. The numerous music initiatives of father and son disciples that were still to be documented might never see the light of day.

Fortunately, the surviving member of the family, daughter Ragini now took up the task. When she finalized one of the drafts, changed printing technology proved to be an impediment. Publishers wanted no piece of daunting labour of composing indecipherable signs. There were no music-literate compositors; more importantly manipulating quirky images above and below marked and plain letters was too much for the flying-finger typists on DTPs. To bring Misrabani compositions, which involved all types of complex symbols, into print now required researching a new way to do that on computers. After using Bhatkhande notations Ragini realized that it needed to be improved – both to express non-vocal compositions and to express them free of alphabets, Devnagri or Roman. Today the new notation system – Ome Swarlipi – in a way, introduces, to global enthusiasts, a composition style that has been in existence for almost six decades in India. In Ome Swarlipi, proficient artistes as well as beginners would find a starting point both, for reading music and playing Misrabani compositions. For those comfortable with Bhatkhande notation system, Misrabani compositions would continue to be available in that format. One innovation leads to other; so what would Misrabani and Ome Swarlipi would lead to, only time will tell.