One of the eminent vocalist cum musicologist, Dr. Laxmi Ganesh Tiwari, based at Sonoma, USA once expressed the wish to make a recording with Pt. Ishwarlal on Tabla and Ustad Abdul Latif Khan on Sarangi. Due to sudden change in his schedule his dream remains a mere longing as Padmshri Ustad Latif Khan passed away in May 2003. Ustad's mastery over the instrument was phenomenal. Subtly would his Sarangi emulate, the finest nuance of human voice. Mentioned first in SangeetRaj as Ravastra or Ravan-hasta Veena, Sarangi is a complex instrument with four main strings and thirty five sympathetic strings. Made out of a single-piece hollowed out wood covered with leather, the instrument is played with a bow. The bow moves on the four gut-strings which provide the desired sound by vertical press of fingers. 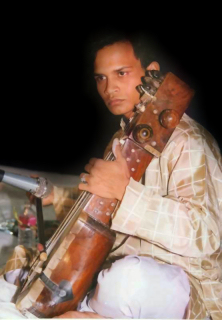 The void an artiste leaves is never filled, but constriction of human concerns makes it less noticeable. Latif Khan envisaged it and therefore prepared a number of disciples to keep the instrument and artistry, if not the artiste, alive and vibrant within the myopic range of listening public.

First among his disciples, Sarwar Hussain, born in Gohad District, Bhind in 1981, is one of the most accomplished and promising musicians of the younger generation of Sarangi players in North India. His musical heritage comes from a long line of Sarangi players from Gohad near Gwalior in Madhya Pradesh. Sarwar Hussain's ancestry can be traced back six generations to Ustad Faazal Khan, the father of Ustad Ghansi Khan, famous for his mastery of the intricate Tappa style. Ustad Ghansi Khan taught his sons who included Ustad Uday Khan, Ustad Chhuttu Khan, and Ustad Haddu Khan, who were the father and uncles, as well as teachers, of Ustad Latif Khan, Sarwar's paternal grand-father.

Sarwar's solo Sarangi debut was at NCPA, Mumbai in 1992. NCPA next invited him to play in its Sarangi seminar in 94. The veteran connoisseurs of Saptak, Ahmedabad in 96, amply appreciated the young talent. Delhi followed suit by inviting him to Swarna Samaroh in 97. Mumbai audience once again had the pleasure of listening to the delicate as well as intricate style Sarwar has so well embodied at tender age when Sur Singar Samsad invited him to play for its prestigious Kal Ke Kalakar. He has charmed large audience at Tansen Samaroh, Gwalior (1999), Ustad Allauddin Khan Samaroh, Maihar (2000), Vasant Rao Deshpande Samaroh, Nagpur (2001) and Chakradhar Samaroh, Raigarh (2001).

An artiste does not subsist on honours and awards, but they do encourage and bolster his faith in the vocation of his choice. All India Radio, Bhopal awarded Lakshmi Bala Samman to Sarwar; he was conferred with the title of Surmani at Hari Das Sangeet Sammelan. In the youth festival organized by South Central Zone Cultural Centre at Vijaynagaram, he received the first prize. He represented India in South Korea, when he was only 16.

Stalwarts have heard him and most of them like Bhavrang Pt Balwant Rai Bhatt have expressed confidence that future of Sarangi lies safe with Sarwar. He is a serious artiste on whom the future of Sarangi rests.